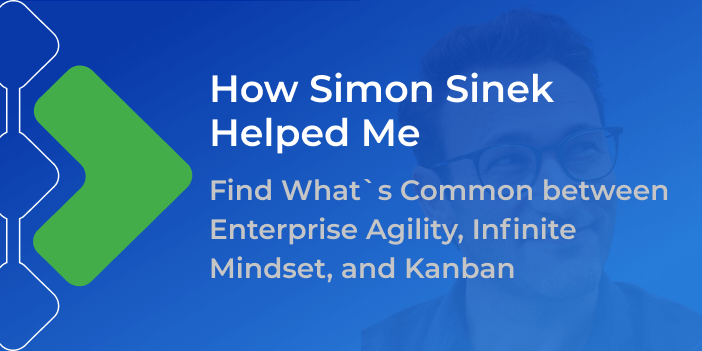 Probably, Simon Sinek has never heard about Kanban or Enterprise agility. Or maybe he has. He looks like a smart guy. Well, it doesn’t matter. What matters is that he often provokes me to think actively and listen carefully.

And this is what happened a few days ago while I was watching one of his talks about his new book The Infinite Game.

Now you may wonder how Simon Sinek’s talk relates to enterprise agility or Kanban. I promise, there is a connection. Just stick with me.

In the modern business world, everybody is talking about business agility, Agile methods, Agile practices, and their importance. And the discussion already moved from “Are you Agile or not? ” to “How Agile are you indeed?”.

Today people are saying – Agility is a matter of survival.

Now, let’s stop for a second and discuss the hot topic – the Infinite mindset.

In many of his talk and his last book, Simon Sinek talks about finite and infinite games and how these two different mindsets impact our lives. Sinek is inspired by James Carse who states there are two types of games:

Finite games – the finite game is defined as known players; fixed rules and an agreed-upon objective. There is a beginning and an end. There is also a winner and a loser. For example football, basketball, volleyball.

Infinite games – the infinite game is defined as known and unknown players, new players can join at any time, the game has changeable rules and the objective is to perpetuate the game, to stay in the game as long as possible. There cannot be a winner and there cannot be a loser. Players drop out of the game when they run out of the will or the resources to continue to play. For example, evolution, technology, life.

Let me ask you a question.

What game is the game of business? That’s right. Business is an INFINITE game. Rules are changeable, players are coming and going, and you cannot win. You can try to last for as long as possible, but you cannot win.

And here comes the interesting part. Most companies get it wrong. They pick to play a finite game, to be the winners and beat the competition. But the fact is that you cannot beat the competition. You can have a better financial year, but it doesn’t make you a winner, because the game continues and it never stops. Next year, new players will come and they could be better and stronger. Maybe the rules will change with new regulations coming.

Can you see it? If you want enterprise agility you need to have an infinite mindset because being responsive and adaptive to changes requires flexibility. You must be aware that rules are changeable, players are coming and going, and you cannot win. You cannot beat the competition. You play to outlast it.

And since I opened the discussion about enterprise agility let’s see how Kanban fits into this picture.

There are different Agile methodologies and frameworks and I won’t hide we are big fans of Kanban here at Kanbanize. What a surprise, right?

But here is the thing. When you search on Google for Agile planning, Agile methodologies and so on, you will most probably find terms such as frameworks, sprints, time-boxed delivery, estimating, iterations. And all these things should guide you to enterprise agility, right?

However business is neither a sprint nor a framework. You cannot put it in a time box. You cannot beat the competition. But you can try to be a better version of yourself day after day.

And while I was watching one of Mr. Sinek’s videos this thought came from nowhere – Kanban brings an Infinite Mindset inside its core and can lead your organization to real enterprise agility.

I know that some of you will blame me for being subjective, but let me explain it.

Let me give you an example. When I came to Kanbanize, we had an average cycle time of 6 days. Meaning we were completing tasks in 6 days on average. Then we made some small changes and the average cycle time dropped to 5 days. Then to 4 days. And we are still trying. We also release product updates every month. The improvements could be small, but it makes the product better and better. I can continue with the examples, but let’s move forward.

This is why Kanban says – Start with what you do now, and respect the current process, roles and responsibilities. And then evolve. This way changes happen smoothly. Employees are not scared to death that they have to do something totally new or that they will lose their roles. Nothing like this. Kanban gives you directions and points out the flaws of your system and where you need to improve.

What Kanban has in common here? Principle 4 – encourage acts of leadership at all levels in your organization. This simple sentence is enough to create psychological safety in the workplace. Think about it. You go to work and any time you have a good idea you can propose it. Nobody is judging. Nobody cares what is your position in the hierarchy. Sometimes the team will go for it, sometimes it won’t. But you can do it because Kanban encourages acts of leadership at all levels. After all, a good idea can come from anywhere. No one has a monopoly on great ideas.

So What? What Is the Bottom Line?

My point is that: