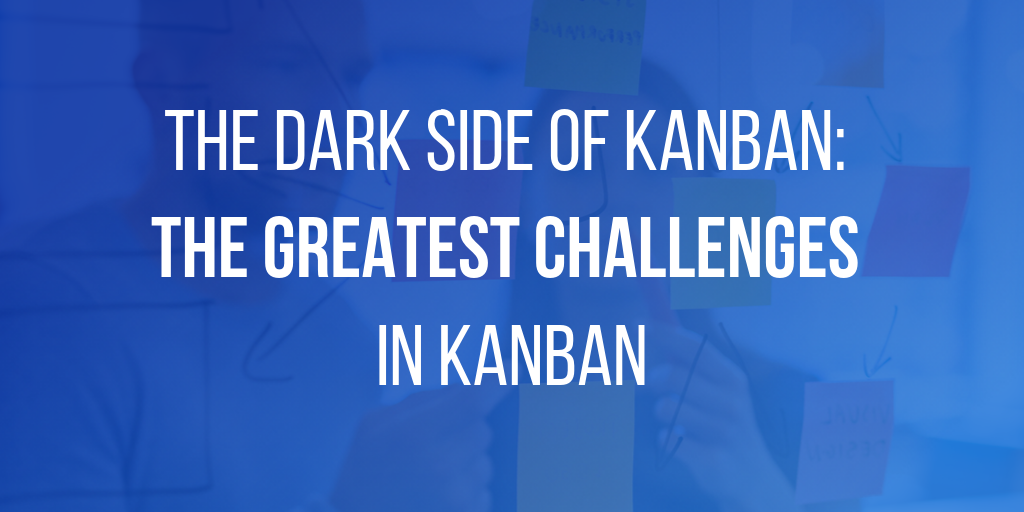 Kanban is by far the best thing that happened to my professional life and, to some extent, my personal life too. The philosophy that it was built upon made such strong sense to me that my whole perception of the world changed.

I loved the simplicity, the elegance and the immediate effect of the method. Following three simple rules could literally change your life and I found that absolutely fascinating.

Being fond of this culture (and it is not an accident that I call it culture) pushed me to experiment. I’ve tried pretty much every technique that I could think of (with varying success) and that is how I’ve experienced not only the bright side of Kanban but also its dark one.

In this post, I would like to share three of the greatest challenges that I’ve had along the way and probably keep you far from the dark side, my dear padawans!

Kanban is simple. In fact, it is probably the simplest method of this kind, at least to my knowledge (simple is not to be mistaken with intuitive or easy). This makes it very light to start, but also quick to fail with.

When you have almost no rules, no clear role definition, no meeting structure, zero mandatory activities and so on, you can very quickly slip into the chaotic world of “what the heck is going on?”.

For that reason, almost everyone who practices Kanban accompanies it with a bunch of techniques borrowed from more prescriptive frameworks or processes. I will share what we do at Kanbanize in a separate article, but my point is that each team or company should think of a more structured way to approach Kanban.

It may sound strange, but the people will actually ask for that. They need someone or something to rely on until they learn how to make use of the freedom and the flexibility that Kanban provides.

This one is probably the most dangerous of the three pitfalls that I am touching on today. Kanban started in manufacturing as a simple signaling mechanism between workers. It cares to provide the right amount of parts at the right time and does not necessarily care about your emotions.

In fact, this ruthless sequence of never-ending tasks may be quite destructive to some people. If someone keeps finding “waste” in your work, you would probably hate them, wouldn’t you? If someone keeps pushing you to optimize you may be frustrated, I understand that.

To mitigate the risks mentioned above – be a great manager. Respect the people in your team, talk to them a lot, feel their pain and be their support. This will be hard at times because they will be simply whining about stuff, but if you make them feel miserable by applying the “stupid manufacturing methods” to their creative work, it is also your job to comfort them.

If I have to be blunt, I have to admit that some people just don’t get it, no matter how hard you try. They will probably never get it, but don’t give up on them. Just remember that we are all human and being treated as robots makes us unhappy.

This is where thousands of managers, teams, and companies fail every day. There’s a principle in Lean to start with something small that is good enough to be shown to customers, but it is pretty counter-intuitive, because you may not want to show a piece of your work that is far from finished and probably quite ugly.

In one of the companies that I worked for we had the notion of a Minimal Marketable Feature (MMF), which is basically the least you can do that would make sense to a customer.

Pause here for a second and think about that.

This is a difficult aspect, especially with engineers. These guys would naturally want to build a space ship when you asked for a motorbike. It’s in their blood, they just want to build cool stuff.

The question is whether your customer would buy the spaceship and does it make sense to build one for them if they only wanted a motorcycle? Even if they wanted a spaceship, do you know what they wanted exactly? Probably not.

I would say, first build the motorbike, show it to your customers, then ask them if they wanted a more powerful engine, bigger tires, more comfort on the seat and what not. Then build the next version, then the next, and in the end, you would still get your ship. That’s a promise.

3 thoughts on “The Dark Side of Kanban: The Greatest Challenges in Kanban”

Get your free copy

Gain Visibility Across All Projects

We use cookies to personalize content and ads, to provide social media features and to analyze our traffic. Some of these cookies also help improve your user experience on our websites, assist with navigation and your ability to provide feedback, and assist with our promotional and marketing efforts. Here is detailed information about our Cookie policy

These cookies allow us to count visits and traffic sources so we can measure and improve the performance of our website. They help us to know which pages are the most and least popular and see how visitors move around the site.

All information these cookies collect is aggregated and therefore anonymous. If you do not allow these cookies we will not know when you have visited our site, and will not be able to monitor its performance.