Applying Agile to aerospace engineering might sound unreal. Nevertheless, it is possible. Find out how Lean/Agile practices can help the Aerospace industry.

Besides software development, nowadays more and more traditional industries with tangible output are adopting Agile practices. Even though the end result is usually known from the beginning, to stay competitive, product development companies look for ways to reduce costs while retaining quality.

Having said that, it is interesting to know if Agile can help the high costly Aerospace industry deliver projects more efficiently too. It might come as a surprise but modern Agile practices find their way even here. Keep reading below to find out how.

Like every traditional engineering process, the aerospace industry goes through sequential product development. It involves well-defined steps with no project stages overlapping. This brings us to the famous V model which is an integral part of systems engineering and in most cases, a contractual requirement for Aerospace projects. 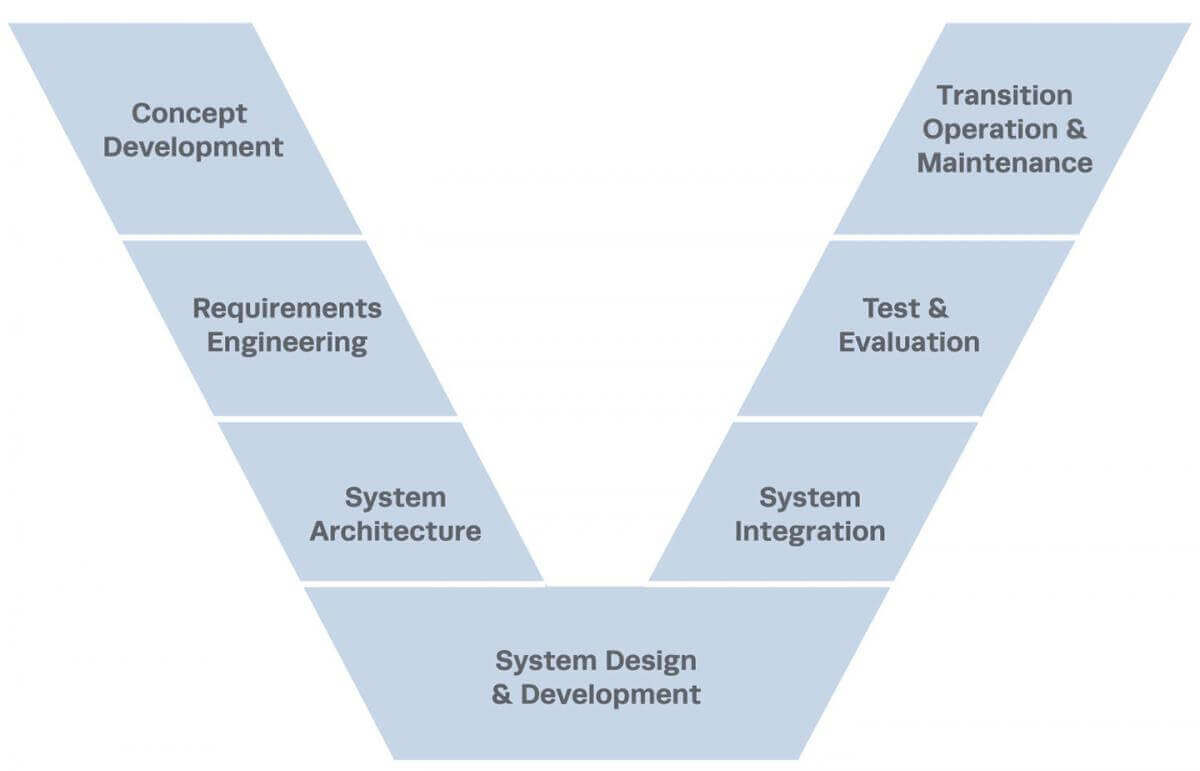 At a very high level, building an aircraft system usually goes through the following phases:

Also, an additional Disposal phase is added when the aircraft system is discontinued and there is a transition to a new product design.

In this heavy process where some of the phases may take many months, even years to complete, an Agile approach to project management is mostly applicable to the Concept and Design stages. There, Agile aerospace teams focus on iterating their plans and getting fast feedback from all concerned parties in order to ensure unambiguous product specifications. Furthermore, teams can make use of new technologies such as desktop simulators and 3D printing to evaluate their design choices, produce low-fidelity mock-ups and clear any misconceptions early in the process.

This is especially helpful for an industry such as Aerospace engineering as all aircraft systems have to go through lengthy certification processes before they become fully operational. Continuously syncing design plans with relevant stakeholders provides teams with the ability to clearly understand what they need to do. It also allows them to apply any necessary changes early in the process, as any later ones would typically result in extreme overspendings or complete project failures.

Why an Agile Approach to the Aerospace Industry?

Due to the high complexity of the work process as well as the long lead times in the aerospace industry, there is a higher need for shared understanding and team collaboration. With those missing, chances are that the product might not pass certification requirements.

Furthermore, the ever-increasing costs in Aerospace projects ask for reducing reworks and a more timely response to emerging issues.

Below, we are going to look at some challenges in Aerospace project management and discuss how Agile can help solve them.

Something that Aerospace companies often struggle with is translating the vision of a certain aircraft program into action. The standard approach for years has been to lay out the roadmap to completion on lengthy Gantt Charts. However, the problem is that they easily become over-cluttered and have no connection to the day-to-day activities on the team level. This results in low clarity and a lack of awareness of what’s going on in the process.

To solve that, Agile focuses on creating high transparency in the project life cycle and making sure that each team knows what is expected from them. In practice, this can be done with the help of Kanban boards. Aerospace teams can map their workflows and track progress from start to finish, which will eventually turn the board into an information radiator. This way relevant stakeholders can quickly unveil inefficiencies or emerging issues in the work process and take the necessary actions to respond to them in a timely manner. 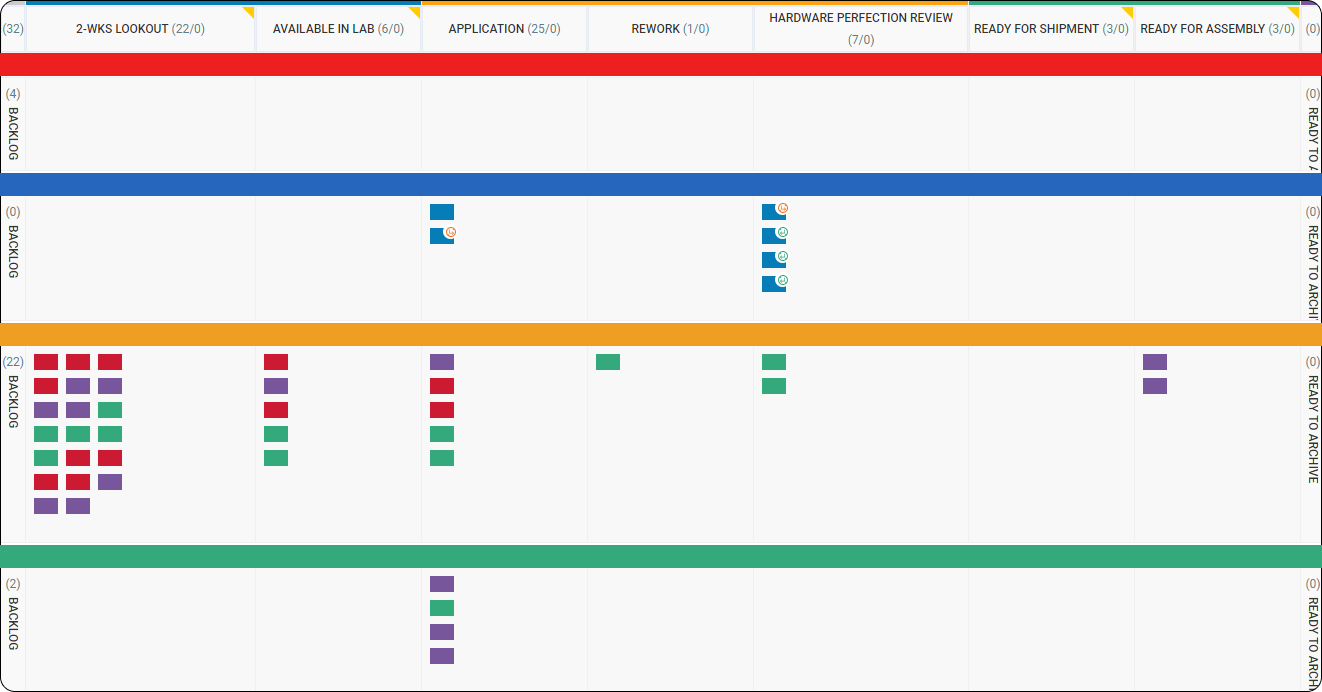 Furthermore, in order to connect aircraft program plans with work packages and subsequent activities, Agile aerospace teams can use interconnected Kanban boards. For example, in Kanbanize, we do that by introducing both Strategic and Team Kanban boards. In the former, we visualize our high-level project plans, while in the latter, we progressively elaborate them to create our deliverables. In an aerospace context, a deliverable could be the design or development of a single engine which is then further broken down into manageable tasks represented by individual Kanban cards. 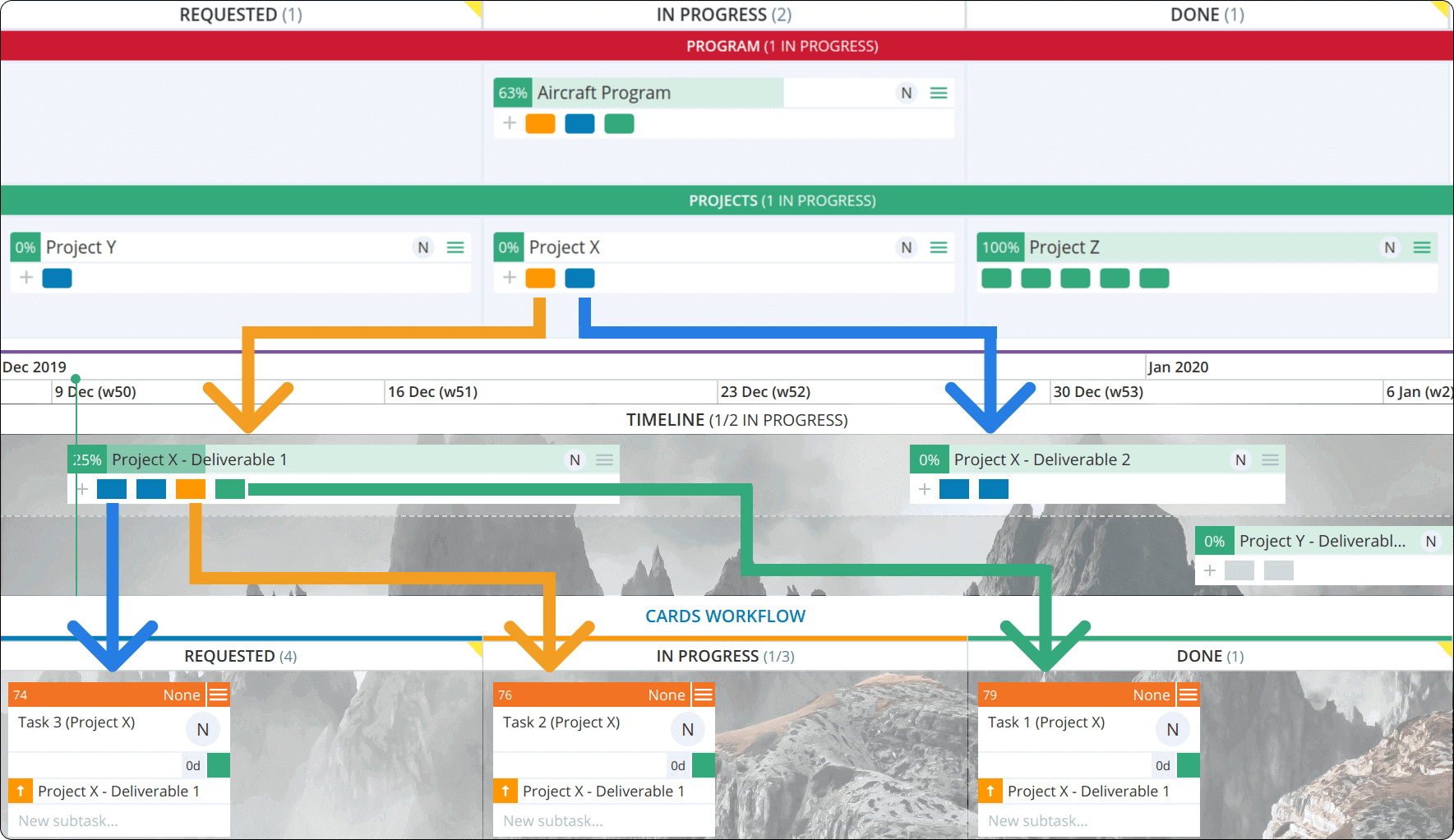 This entire structure bridges the gap between planning and execution. It also helps relevant stakeholders see the status and progress of plans in real-time which contributes to an increased shared awareness and less chaos in the process.

The design and development of an aircraft system requires interdependent teams to synchronize their work. However, due to the heavy processes in Aerospace engineering, often there are cases of disconnections between them, resulting in communication losses of around $15.8 billion annually.

The most obvious Agile response to that lies within colocation and face-to-face communication. However, especially when talking about large companies, a lot of teams working on large aircraft programs are often distributed around the world.

In such cases, the best practice is to bring the teams together for a short period. This is done in the beginning of the project which helps create shared understanding and determine the approach for work execution. After that, aerospace teams can sync progress, discuss impediments and continuously improve their processes with the introduction of regular cadences. Those include Daily Stand-up meetings, Service Delivery Reviews, Operations Reviews, etc. 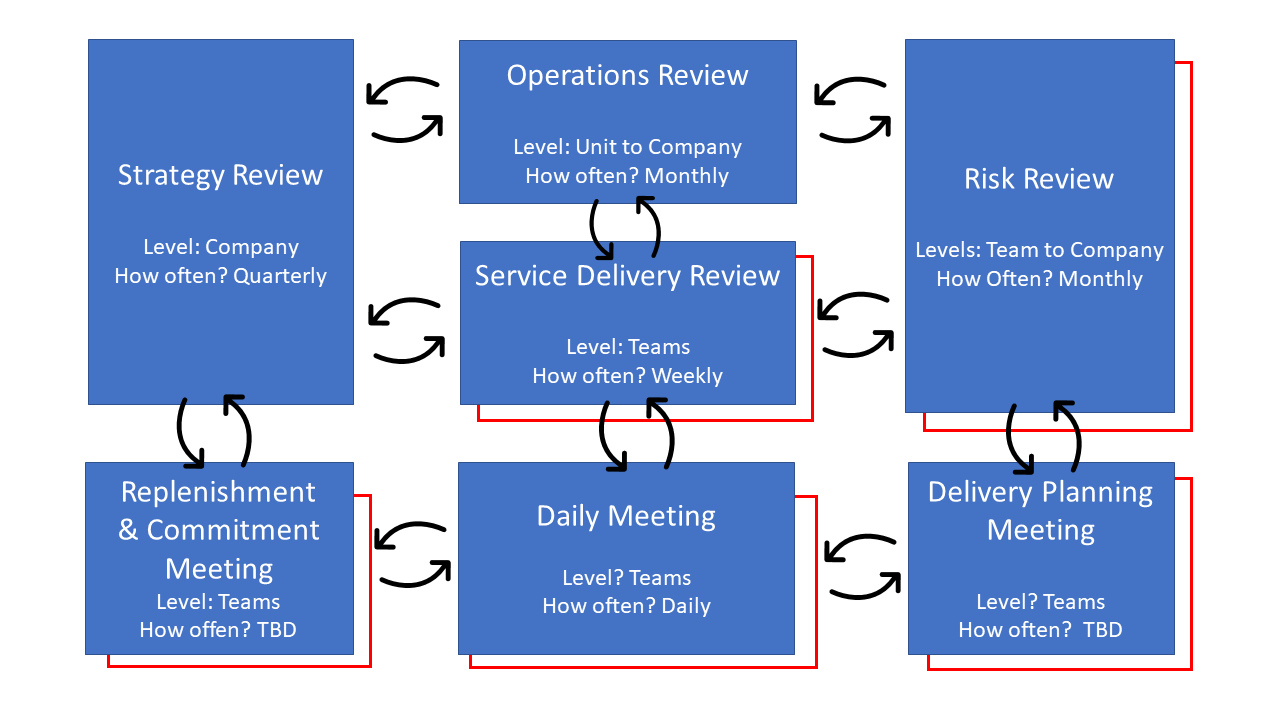 In addition to that, as the Aerospace engineering life cycle is linear, a clear process for dependency management is also necessary. Agile preaches cross-functional teams in order to break silos and eliminate dependencies. However, in a complex engineering environment, that might not be always possible.

To compensate, another practice of Lean/Agile teams is to visualize their dependencies and manage flow over them. Aerospace engineering companies using Kanbanize do that through related Kanban boards. There, they visualize the relationship between tasks or bigger initiatives with the help of card links. 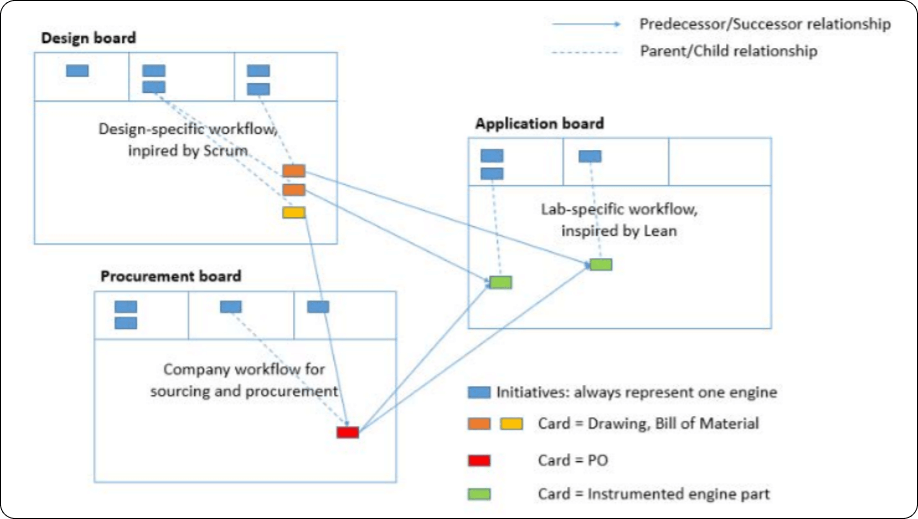 Combined, those approaches close the costly coordination gaps between different teams and eventually increase the likelihood of successful product completion.

As already mentioned, another challenge for the aerospace industry is the ever-increasing costs of producing aircraft systems. According to a study from Deloitte, total cost overruns on aerospace projects this year (2020) will rise to 51%. Much of those costs come from large product reworks that also cause significant schedule delays.

Agile project management looks to tackle that by putting emphasis on constant collaboration with customers and progressive elaboration of different product components. This is done with the intention to assess the value of work items, prioritize and gather more knowledge about them before they are committed for final execution. After that, aerospace teams hold regular pull-planning events (such as Replenishment meetings) where they decide what to work on next based on their capacity.

This approach creates a better structure in the process while reducing mistakes due to multitasking. Furthermore, due to the progressive refinement of even the smallest product elements, engineering teams decrease the likelihood of abandoning work items or doing extensive rework because of unclear specifications.

This process can result in lower costs while retaining production quality even in projects such as the development of fully operational aircraft systems.

Real-Life Example of an Aircraft Engine Program Delivery with Kanban

Implementing Lean/Agile practices in a complex industry such as aerospace is easier said than done. That’s why we want to bring theory into practice through a real-life case study of a division in an aviation company that boosted its productivity and project delivery with the help of Kanban.

Struggling with pressing problems such as low process transparency, workflow inefficiencies, difficulties with work prioritization, poor coordination between multiple teams, etc., the management turned to Kanban to solve their issues.

The implementation of its practices provided the division in the company with some immediate benefits including:

Even though unusual, Lean/Agile practices still find their implementation in the highly complex Aerospace industry. Some of the major challenges that an Agile approach to project management helps Aerospace engineering companies solve include:

During the 30-day trial period you can invite your team and test the application in a production-like enviroment.